Find us at local festivals!

Our festival season is mid April through early October. Check out the schedule of public events on the "more" page. 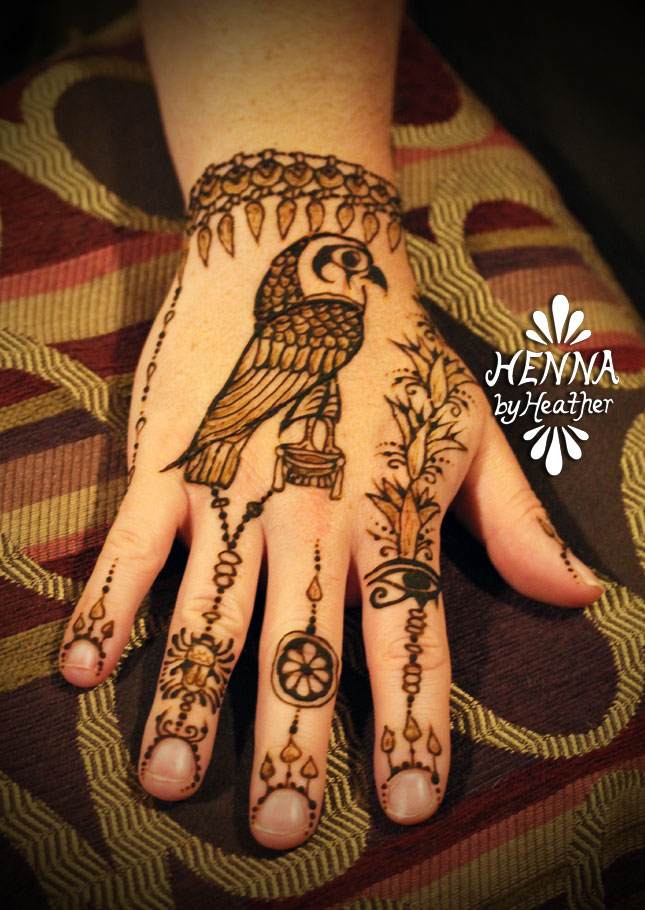 I did this Egyptian inspired henna design today for my husband, who teaches ancient archaeology and art history at the Rhode Island School of Design. He agreed to be my model, on the condition that I did something Egyptian, and did lots of research to ensure that everything I did was legit and authentic. We ended up doing Horus as the focal point – a bit of a cute version, somewhat unintentionally – I just can’t help it! All of the elements are inspired by faience – mostly jewelry. Everything except the Horus was from the New Kingdom. The New Kingdom seems to have some of the best surface design elements, which translate well into henna. We also did a Wadjat Eye / Eye of Horus ring, which were apparently fairly popular in the New Kingdom, as there were multiples of them in the books I was looking through. And really, who doesn’t want to wear an eye on their hand? Kids today at festivals still think that’s just about the coolest thing, when they see our henna hand designs that include eyes. Anyway, back to the authentic inspiration. There is a small winged scarab beetle – unique in that its wings are fully spread and its legs are drawn, whereas usually you just see the body, with no legs or wings extended. There’s also a rondelle with a little flower on it – which, literally, is all that the book I was looking at says about them right next to the photo. And then, of course, we have a trail of Egyptian blue Nile lotuses. Last but not least, the cuff is inspired by a beaded collar, and was probably the most fun part of this to draw (because it’s the most like other traditional henna design, with its repetitive, geometric patterns). But wait – there’s more! The finger accents are also inspired by beadwork – the sticks-with-leaves were metal, separated by faience beads.

About the Author: Heather Caunt-Nulton

Heather is an internationally reknown henna artist and the author/artist of over a dozen books on henna body art.